Google Alphabet Inc. said the company would ban advertising and monetization of videos on the YouTube platform and other content that goes against 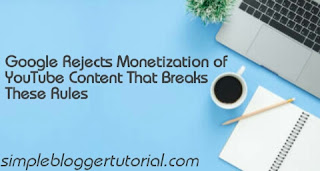 Google Alphabet Inc.  said the company would ban advertising and monetization of videos on the YouTube platform and other content that goes against the "tested scientific consensus" on environmental issues.

Starting November 2021, these revenue-related limits will be placed on content that calls climate change a hoax or denies that greenhouse gas emissions and human activities have contributed to Earth's long-term warming, Google said.

Google will use a combination of automated tools and human reviewers to identify violations among content, Google served ads, and YouTube videos that earn advertising revenue through the YouTube Partner Program.

"In recent years, we have heard firsthand from a growing number of our advertising partners and publishers who have expressed concern about ads running alongside or promoting inaccurate claims about climate change," Google said in its announcement.

Ads will still be allowed on content that talks about the public debate on climate policy, for example.

Google Flights this week launched a new function that allows travelers to find out estimated carbon emissions across all flight options searched by Google.

The information appears in flight search results and on booking pages, and users can sort results by the carbon emissions associated with each flight.  (Market Watch)